A GREAT FRIEND OF POLAND 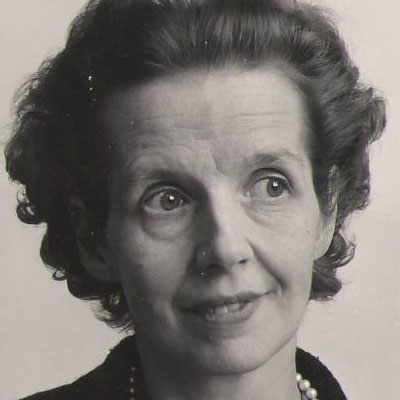 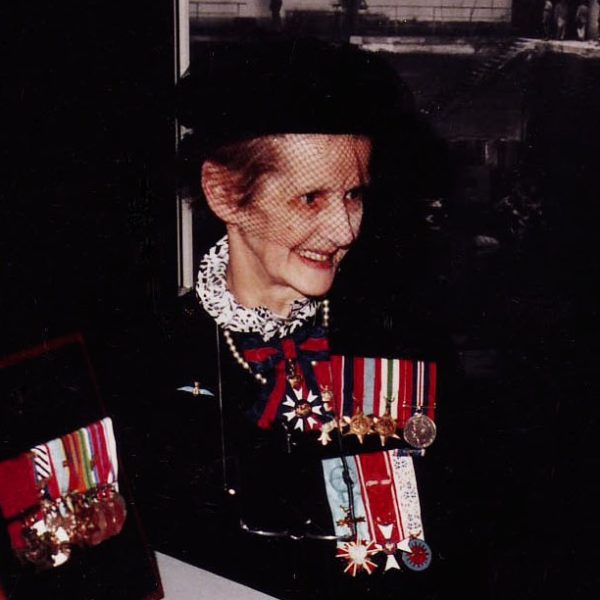 Sue Ryder was a remarkable British charity activist who ran her campaigns all over the world. She established an international foundation in tribute to the victims of World War II. Apart from her activity during the war, Sue Ryder helped at least 500 thousand individuals from over 50 nationalities. She featured in the British House of Lords as Lady Ryder of Warsaw. A great friend of Poland, she founded 30 nursing homes, hospices and hospitals. Her involvement in Polish affairs and aid were truly unprecedented. She is mentioned in the same breath as Florence Nightingale and Mother Teresa of Calcutta. Was honored with eight honorary doctorates (Liverpool, Exeter, Essex, Reading, Leeds, Kent, London and Cambridge). She was awarded, among others, the Order of St Michael and St George, the Order of the British Empire, the Commander’s Cross of the Order of Polonia Restituta, the Cross of Pro Ecclesia et Pontifice, the Order of Ecclesiae Populoque Servitium Praestanti and – extremely important for Sue herself – the Order of the Smile, which she received from Polish children in 1983. The ceremony took place in Konstancin-Jeziorna, where Sue Ryder created a home for children with rheumatoid arthritis. However, Sue Ryder is still known too little in our country, despite the great things she did for Poland.

Margaret Susan Ryder, known as Sue Ryder, was born on 3 July 1923 in the city hospital in Leeds, to a landowner family settled in Suffolk County. The family house was adjacent to the slums, which were a stark contrast to little Sue’s environment, filled with love, care and prosperity.

However, it was not a fortress. Quite the contrary, Sue Ryder’s parents voluntarily worked for the poor and the sick, and young Sue was willing to lend a hand. Her mother took her for didactic walks around the slums and explained that this was also another shade of life. “Don’t close your eyes,” she said, “don’t turn your head”. Children from the neighborhood were always welcome in Ryder’s garden and could always count on sandwiches and sweets. It was the family home that planted in her the need to help the poor and the disadvantaged. As she wrote: “And it was my mother who had the greatest influence on my childhood, as well as my whole life and much of my work. She showed me care, gave me courage and always helped. Perhaps the most important of her qualities was the warmth in her attitude towards people and her sincere interest in their needs. My mother was an active and sociable person even at a ripe old age.”

The house in Scarcroft was swarming with people, something was always bustling there. Guests would come, some would seek help or advice, others needed care, and the office of our estate would be frequented by entrepreneurs. Vagabonds and homeless people were not sent away from the door with money, but were invited for a warm meal, bath and a change of wardrobe. And if anyone needed a night in, they were always treated with due respect.

After the outbreak of World War II, only 16 years old, she volunteered to join the FANY (First Aid Nurses Yeomanry). To do so, she had to fake her birthday because she was too young to serve. Then, after a three-week course, she and two of her friends volunteered to the headquarters of SOE (Special Operations Executive). After a short stint in the Czech section, Sue Ryder was seconded to the Polish part of the SOE, engaging in sabotage operations in occupied Europe. In August 1944, she sent airdrops of weapons for the fighting Warsaw.

She collaborated with the Silent Unseen paratroopers, whom she tenderly called “Bods”. Their courage, determination and dedication exerted great influence on Sue Ryder’s future. Sue said that it was worth dying for them, but also living for them. She always remembered them as cheerful, singing and dancing despite extremely dangerous missions, of which everyone was well aware (and many did not return). During her service in SOE, Sue Ryder met about 300 anonymous heroes from the ranks of the Silent Unseen who changed her forever.

During the war, Sue came into direct contact with the enormity of human suffering. After the end of the war, she helped former prisoners of Nazi camps, crossing Europe with SOE aid mission. She was about 25 years old at the time! Terrible things were happening in liberated Europe. Starved victims of the camps and war atrocities stole food, killed for revenge, for which they landed in prisons, sometimes with the longest sentences. Sue visited the Allied prisons, saving the lives of many condemned to death or, if this was not possible, accompanying them until their last days. Thanks to her, about 40 people evaded execution, and more than 1,400 Poles were released from prison and returned to their homeland.

In 1952, she established the first Sue Ryder’s Home in Germany for DPs (displaced persons) rescued from prisons who had neither documents, nor money, nor even a plan and chance to return to their homeland. These experiences led her to become fully involved in charitable work for the benefit of the sick, homeless, forgotten and destitute people. Soon echoes of her help reverberated around the world. Today it resonates in 13 countries on 4 continents. 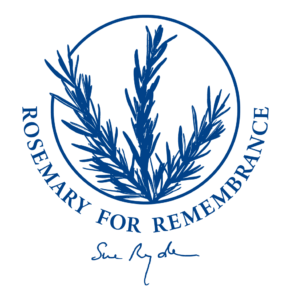 In 1953, being barely 30 (!), she established a foundation named after her. It was established thanks to a modest inheritance, credit and a great dose of optimism. Sue Ryder decided to buy a house in Cavendish, where her mother lived, and set up the Foundation’s headquarters and a nursing home there.

“There’s rosemary, that’s for remembrance, pray, love, remember” – a quote from Hamlet and a sprig of rosemary have become a symbol of the Foundation, a living memorial to the millions of people who gave their lives during the two world wars, fought in defense of humanity, as well as of the countless persecuted ones suffering and dying today, left alone at the times of peace. The Sue Ryder Foundation has built more than 80 houses in 15 countries around the globe, which still serve the sick and suffering. As she wrote: “It is important for people with disabilities to be welcomed into society, that they do not find themselves on the dark side of the world, where they do not find any activities or interests beyond their own ailments and television. Being a disabled person does not disqualify him/her as a human being, but requires finding a <

Until 1978 she had organised rest and rehabilitation trips to Great Britain for former concentration camp prisoners. About 8 thousand people, mainly Poles, used this form of help. Together with her husband Leonard Cheshire (1917-1992), a famous RAF pilot, a hero of World War II and a charity activist of numerous merits, she initiated joint humanitarian actions in various countries of the world affected by human tragedy. To finance her great activities, Sue Ryder set up over 600 charity shops.

In February 1955, Sue Ryder met Leonard Cheshire, an RAF pilot, who rose to rank of a colonel only at 25. During the war he was responsible, among other things, for bombing Munich and destroying the Gestapo headquarters there. When they met for the first time, Leonard was already running his own foundation, which supported the sick in many places around the world.

It is not difficult to guess that they quickly found common ground. Their shared values, vision and sense of actions led them to the altar. Sue Ryder wrote: “(…) we are engaged and planning to get quietly married abroad in the near future. In this way, we ensure that the only goal that remains is the cause itself – to help the sick and those in need, whoever and wherever they may be”. They were married on 5 April 1959 in India in the private chapel of Cardinal Valerian Gracias in Mumbai. The ceremony was followed by a very small reception at the house of Leonard Cheshire “Bethlehem” on the outskirts of Mumbai. Interestingly, it was prepared by local patients and staff.

Sue Ryder and Leonard Cheshire had two children: a son – Jeromy Cheshire (1960-2019), and a daughter – Elizabeth Cheshire (born in 1962). She hardly spoke of her personal matters. Allegedly she had no hobbies or time to relax. All her attention and energy was devoted to helping others. 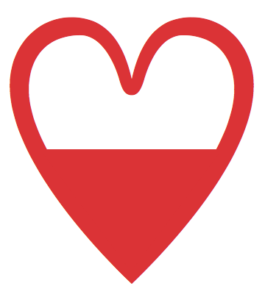 Poland, starting from the meeting with the Silent Unseen, has always been a special place for Sue Ryder. Immediately after the war, together with an international group of volunteers, she rushed to aid the capital city and further on she consistently brought help to Poland and the Poles. Sue personally drove the famous Joshua truck with various materials, and brought clothes, medicine and food.

She established 30 Sue Ryder’s Homes (nursing homes), five hospital oncology wards and three hospices which took in sick, lonely and homeless people. During the communist era, the Foundation could not be run in Poland, so all the facilities were handed over to the Polish state. Sue Ryder always wanted to be close to Poland, even in the most difficult times. She was the first foreigner to receive permission to enter the country under martial law.

As she wrote: “I feel that I belong to Poland. It is a colorful country, so often misunderstood, relatively unknown, and due to its geographical location, exposed to attacks from its stronger neighbours throughout its long history. Poland is a country with which I have been closely tied for over 40 years. Owing to its folk tradition and expressed regional culture, as well as its unwavering spirit, Poland, despite frequent invasions and partitions, has never lost its self-determination and will to survive.

She spoke about the Poles “We, the Poles” and treated Poland as her own homeland. In 1978, she received the title of nobility from Queen Elizabeth II. What did she choose for her territory? Warsaw – and so she was known in the British House of Lords as Lady Ryder of Warsaw. She was awarded honorary citizenship of Warsaw (1993), Gdynia and Konstancin-Jeziorna. Two squares in Poland were named after her. The first, in Warsaw’s Ochota district, was given the name Sue Ryder on February 2, 2006, in the presence of, among others, Her Royal Highness, Princess Anne and the wife of the President of the Republic of Poland, Maria Kaczyńska. Sue Ryder Square in Gdynia was opened as the second one. The celebrations on 10 September 2007 were attended by, among others, Jeromy Cheshire, Sue’s son. In Konstancin-Jeziorna there is a Sue Ryder Street, where the Konstancin-Zdrój Health Resort is located. 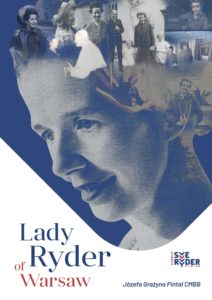 In 2011, the Sue Ryder Foundation published a book in Polish “Lady Ryder of Warsaw”. It was written by sister Józefa Grażyna Pintal CMBB, who worked for 10 years as a nurse in Sue Ryder’s House in Popkowice in the Lublin region. This is what she wrote about Sue Ryder: “I had the opportunity to meet my heroine personally in 1990. She crossed the threshold of our nunnery when she was visiting the institution in Popkowice. Going back, I recall not only the smell of rose soap that I received from her, but above all the extraordinary figure of a delicate woman of tiny build, with a smile on her face and a deep, penetrating gaze. She was dressed unusually straightforward and modestly – in a navy blue dress with tiny white dots, she had a handkerchief on her head, and laced prophylactic canvas boots on her legs. This only meeting with the founder was particularly important for me. These were not only the first years of my professional career, but also my first experiences of being with and serving the old, sick and disabled people. She, unconsciously, with her attitude, way of being and selfless actions, provided me with an example of a different perspective on the residents of the facility and, more broadly, on the patient as a subject and not an object of work.

Sue Ryder passed away on 2 November 2000. She left an enormous legacy of goodness, compelling future generations to work for others.

SEE AND LISTEN TO SUE RYDER